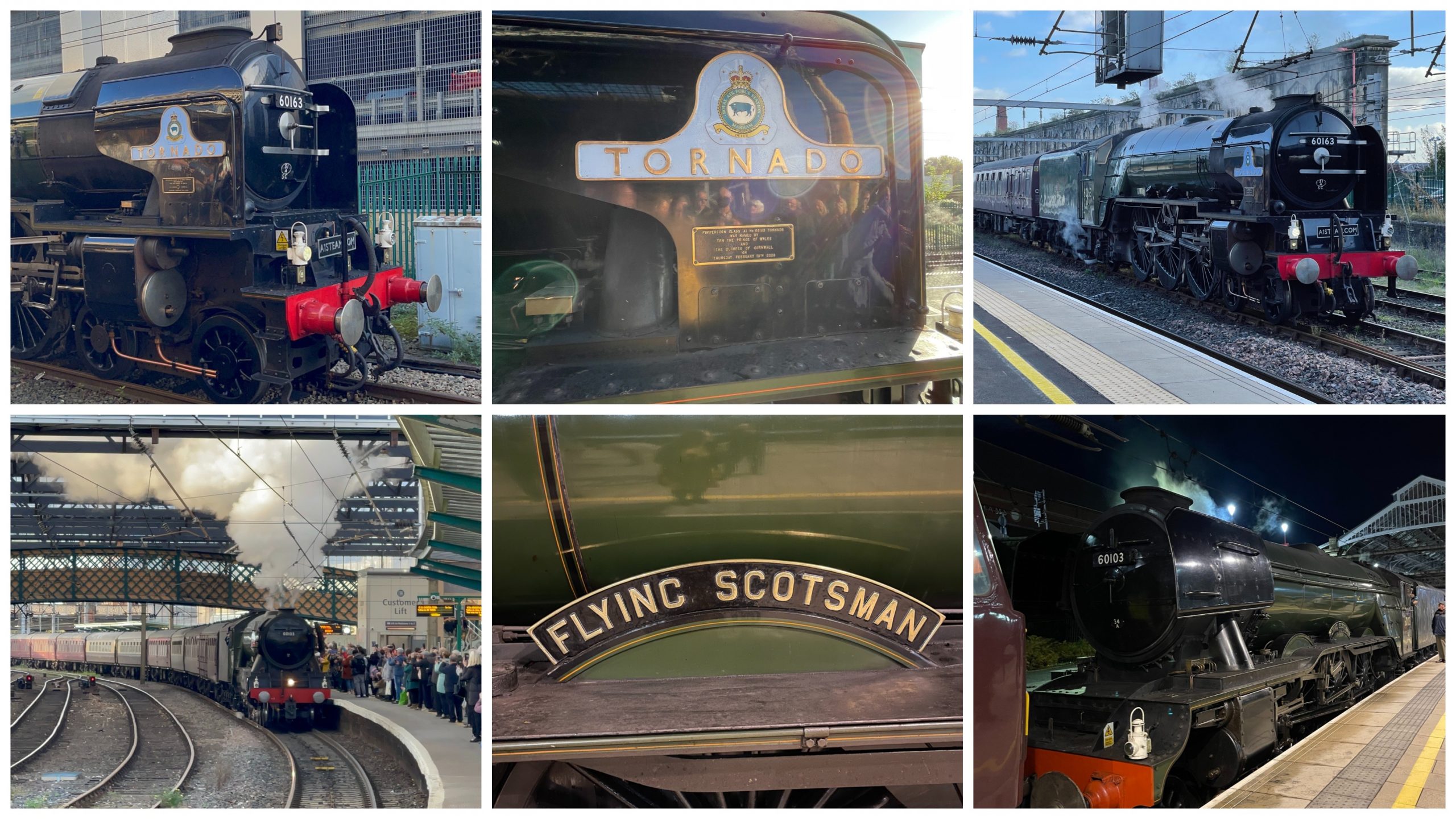 On 21st October 2021, the husband and I had the pleasure of having a trip behind the epic engines of Tornado and the Flying Scotsman. The trip started with us alighting our train at Warrington Bank Quays. It was diesel hauled from Birmingham to Preston.

The LNER Peppercorn Class A1 Pacific 60163 Tornado (*) is the newest mainline steam engine to have been built. In the 1990s the A1 Steam Locomotive Trust was formed and works began on constructing the engine at Darlington Works. After 19 years the Tornado travelled under it’s own steam for the first time in 2008. Ever since then Tornado has been hauling special charters along the UK mainline!

* wow what a mouthful!

Tornado joined our train in Preston – much to everyone’s excitement! Everyone was crammed onto the platform to see this amazing engine! You know how much I love the little engines (they still own my heart don’t worry) well seeing the Tornado up close was just amazing! What a sight to see! It’s huge in comparison to my beloved Ffestiniog engines!

Tornado hauled us up to Carlisle via the beautiful Settle and Carlisle line which passes through the Yorkshie Dales and North Pennines. The line dates back to the 1860s and has survived two attempts to close the it – once in the 1960s (I imagine this was Beeching’s doing but I could be wrong) and then again in 1980s when the repairs to the Ribblehead Viaduct were deemed too expensive. Thankfully the viaduct was repaired and is now one of the highlights of the Settle and Carlisle line.

Unfortunately we were sat on the wrong side of the carriage to see the Tornado curve along the viaduct but it’ll be something I want to do one day – be in the valley to see a steam engine cross the Ribblehead Viaduct would be spectacular.

Another noticeable landmark on the line is Dent Station – the highest mainline station in England sitting 1,150 feet above sea level. Our train didn’t stop there so all I saw was a blur but even so I was quite excited rushing through the station behind Tornado.

From Dent we head up towards Carlisle passing through various tunnels and over various viaducts before leaving the Yorkshire Dales National Park at Kirkby Stephen. The viaducts and tunnels don’t end there, there are plenty more as the line follows along the River Eden up to Carlisle.

We arrived at Carlisle Station on time! We all disembarked and rushed off to see Tornado again. After all the “regulars” had taken their photos the hardcore train enthusiasts (me included!) stayed on the platform to watch the engine run around to the sidings. I wish I could tell you that I went into Carlisle itself (apparently there’s a castle?) but no I stayed at the station for the whole 3 hours we were there! It’s quite a nice station and is undergoing some refurbishment – annoyingly including platform 2 which meant we couldn’t get close enough to the engines.

I took plenty of photos of Tornado in the sidings and watched it leave – presumably heading back to Carnforth and waited patiently for the Flying Scotsman to arrive.

I’m not sure if I even need to tell you much about this engine as it’s the most famous engine in the world! No 60103 “Flying Scotsman” was built in 1923 at Doncaster Works (*).  It was the first engine to officially be clocked at the 100mph mark and the first engine to circumnavigate the world.

During the Second World War the Flying Scotsman was painted black as was all railway stock. Post war it was repainted in BR green when the railways were nationalised as British Rail. Over the years it has passed through various owners (including Alan Pegler who saved the Ffestiniog Railway – ironic considering the Flying Scotsman bankrupted him) until it eventually ended up being purchased and overhauled by the National Railway Museum.

It has an absolutely fascinating history and if you would like to know more then I would suggest you watch Rob Bell’s programme about the Flying Scotsman. I enjoyed it immensely.

(Thank you to the National Railway Museum for all the information!)

Return to Preston with the Flying Scotsman 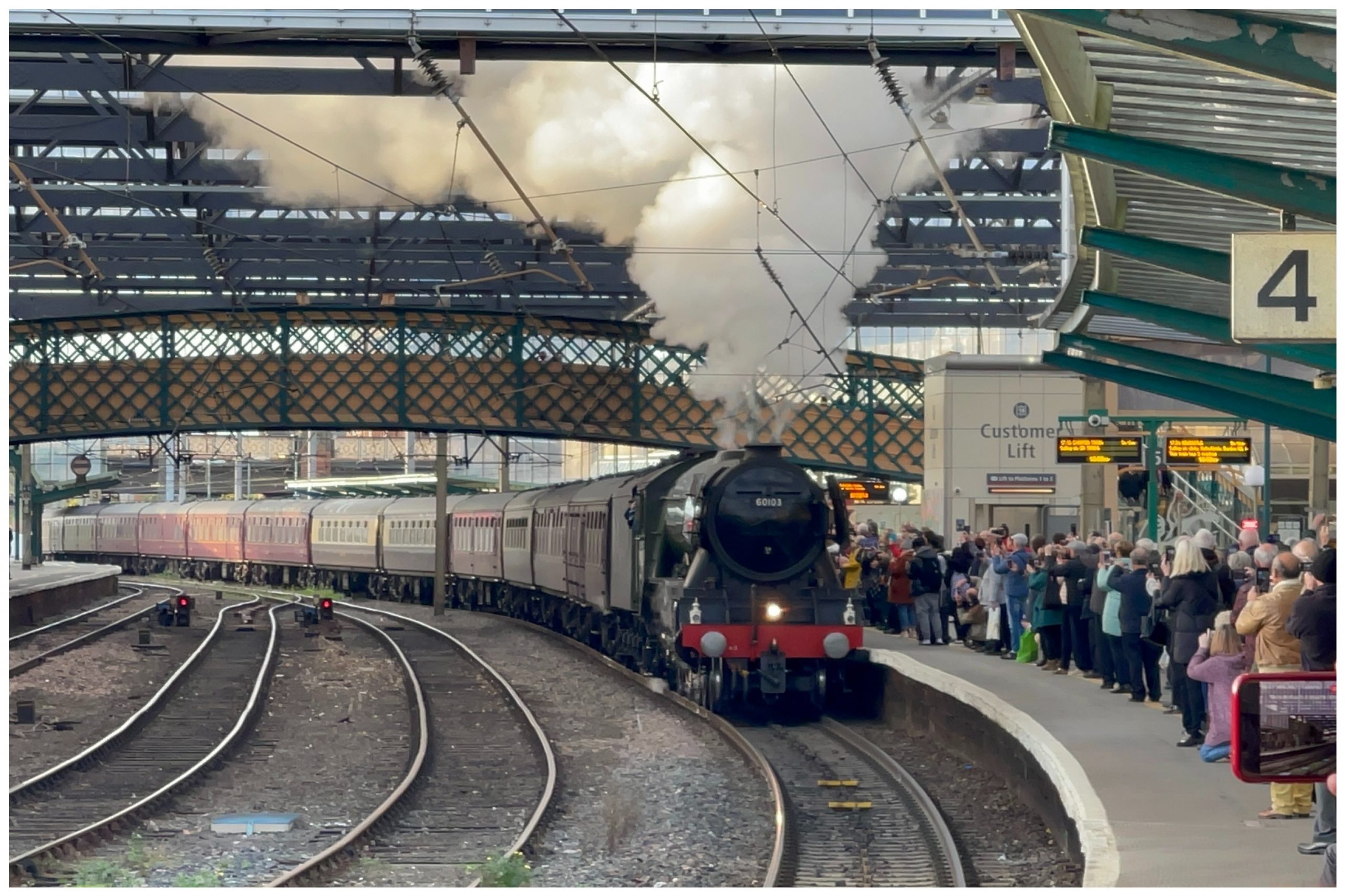 At Carlisle Station the Flying Scotsman pulled into the sidings to pickup our carriages. I was stood at platform 2 watching it leave the sidings whilst the husband was on platform 4 waiting for it to come in. As it left the sidings to run around to platform 4 I ran to the footbridge and watched it pass underneath. Oh to be stood there with the steam from the Flying Scotsman was just amazing! I know it makes me sound proper mad but honestly what an experience! If you watch my YouTube video you might hear me get terribly excited!

Our return journey was a bit hampered at Hellifield Station. After a waiting for what seemed like ages we were told that the Flying Scotsman had suffered a failure – we later found out it was a brake failure on the engine itself and since we were heading downhill from Hellifield the driver decided it wasn’t safe for us to continue. It took approx 80 minutes from them to sort us out at Hellifield – had to wait for an Inspector to travel from York to confirm the brake failure, for National Rail to confirm the diesel (which was at the bank of the train) was allowed to run around and for us then to find a slot to travel along the mainline to Preston. After all of that we got into Preston where we had 20 minutes before leaving.

The husband and I decided to get off the train at Preston so we could run down to see the epic engine as we didn’t get to see it up close in Carlisile. We may have spent a little bit too long admiring the engine because I just happened to turn around and saw that everyone else had cleared off and that the doors to our train were all shut! Thankfully we were let back on and had to walk half the length of the train back to our carriage… where everyone knew that the delay was because they’d lost passengers (as it turns out it wasn’t even us they were waiting on!). Oops!!

All in all it was a fabulous day out and I’m super pleased to have had the opportunity to travel behind two amazing engines. For more information about Tornado or to book on one of the tours then take a look at the A1 Steam Trust‘s webpage.